Here's the Greek blonde girl before a recent show in Philadelphia

One of my all-time favorite movies is Rocky. There is just something very inspirational about this film for me. I really enjoy the message about going for your dreams and never giving up. I often have the film’s theme song Gonna Fly Now by Bill Conti playing on my iPod when I am working out or on one of my runs.

I started doing some serious thinking (dangerous, I know)  and I realized there must be some connection to the movie Rocky and people drinking Eggnog at Christmas time. Rocky Balboa drank raw eggs during training and before the fights so he could get the instant protein and none of the fat into his blood stream. It is like an adrenaline rush to the body for boxers and others who work out when they drink raw eggs. 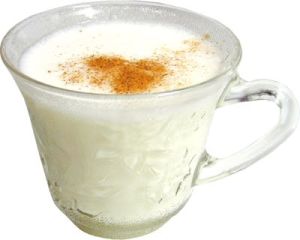 Isn’t it odd that people don’t start drinking eggnog on Halloween?There’s no eggnog served with the ham at Easter. You don’t really see eggnog being served alongside turkey and Aunt Zelda’s green bean casserole at Thanksgiving, now do you?

But for some reason — as the year starts to wind down, and right at Christmas time people start drinking eggnog. All of that raw egg starts making their brain melty and effects their decision-making. I did an earlier blog, which you can read here,  where people tend to make a fool of themselves at the company Christmas party. The main culprit of making poor decisions at any company Christmas  party is usually because someone dipped a little too much into the free eggnog.

When people drink eggnog and have all of this raw egg crap get into their noggin and blood stream they get all loopy. The instant protein is like a shock to their system (aka muckery) and they start going all Rocky on everything and everybody. They start making wild New Year’s resolution to lose weight and get into shape. Not because it’s a New Year, but because they are all hopped up on eggnog and want to be like Rocky Balboa.

Yo’ Adrian, I have an example for yoos — a 92-year-old man who’s been smoking 3 packs a cigarettes a day for 75 years. He takes a sip of eggnog and all of a sudden he’s stripping down and shadow boxing everyone in the room like he has become the next Apollo Creed. He crushes his cigarettes and vows to his family that his New Year’s resolution is that he is going to start running marathons and he will quit smoking. Well, the next day after the eggnog is out of his system, old grandpa can be seen walking around his living room butt naked, tearing the house apart, cussing like a sailor, looking for his lost package of cigarettes.

In the original Rocky movie the The World Heavyweight Championship bout was scheduled for New Year’s Day 1976, which also happened to be the kick off day to the United States bicentennial. So I think that also influences these people into making crazy New Year’s Resolutions, they want to be like Rocky and change history and change their own destiny on New Year’s Day.

Here’s a quick montage from the original Rocky movie I found on Youtube. Check out 1:20 into this remix and you can see Sly downing the raw eggs.

Hello! Thanks for stopping by. My name is Ava Aston and I am a recording artist and actress. I'm just an ordinary girl who acts, sings, writes songs and now writes this blog. I hope you enjoy my blogging enough to want to subscribe. Blessings, Ava If you want to learn even more about me, check out my website at www.avaaston.com
View all posts by Ava Aston's Muckery →
This entry was posted in Actress, Ava Aston, Bizarre, Holiday, Hot chick, Working Out and tagged appllo creed, ava aston, bill conti, Christmas, easter, eggnog, funny girl, Greek, halloween, inspire, mr. T, New York, Philadelphia, raw eggs, Rocky, sylvester stallone, workout. Bookmark the permalink.

8 Responses to Eggnog: The Rocky Effect