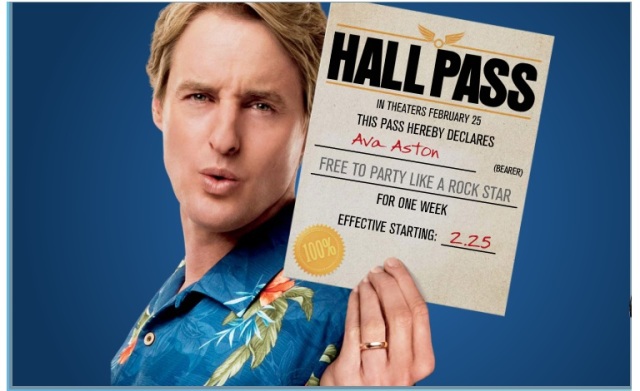 I haven’t seen the new Farrelly brothers comedy starring Owen Wilson that opened recently at the theaters. From the trailers I saw on YouTube it looks pretty funny. I guess others agree because it has done pretty well at the box office so far. It was #1 on opening day with $4.6 million, and initial estimates showed it at #2 for that weekend behind Gnomeo and Juliet, but Gnomeo and Juliet was overestimated and brought down to #2, putting Hall Pass in first.

The plot has two married best friends Rick and Fred played by Owen Wilson and Jason Sudeikis respectfully, who have a have a lot in common. But when the two men begin to show signs of restlessness of their marriages at home, their wives played by Jenna Fischer and Christina Applegate take a bold approach to revitalizing their individual marriages: granting them a “hall pass” one week of freedom to do whatever they want… no questions asked. At first, it sounds like a dream come true for Rick and Fred. But it isn’t long before they discover that their expectations are out of sync with reality.

Now, the Greek girl does not approve of granting a “hall pass” in real life as it was granted in the movie to get out of a commitment like a marriage (even for one week), but  I think at certain times there does need to be a “hall pass” granted to get someone out of other tricky situations. In my quest to make the world a better place, I have made another very important self-appointment and named myself Hall Pass Czar.

With all of the powers invested in me as the Hall Pass Czar I have compiled a list from the top of my Greek noggin of situations and people I would grant a hall pass to get them out of a current situation for one week, no questions asked.

Maybe I will give myself a hall pass and go see the movie Hall Pass this weekend. It’s been a long week and I think it’s time for some me time.

Hello! Thanks for stopping by. My name is Ava Aston and I am a recording artist and actress. I'm just an ordinary girl who acts, sings, writes songs and now writes this blog. I hope you enjoy my blogging enough to want to subscribe. Blessings, Ava If you want to learn even more about me, check out my website at www.avaaston.com
View all posts by Ava Aston's Muckery →
This entry was posted in Ava Aston, Blog, Blonde, Justin Bieber, Kardashian, Mr. Bricks and tagged ava aston, comedy, earthquake, Farrelly Brothers, Hall Pass, japan, Jenna Fischer and Christina Applegate, Kardashian, Mr. Bricks, muckery, Owen Wilson, tsunami. Bookmark the permalink.