The Wheels On The Bus Go Round And Round

“The Wheels on the Bus” is an annoying, but very popular children’s song. It is popular on journeys to keep children amused because of its hypnotic and repetitive rhythm. In particular it is sung by pre-teens on bus journeys. It has been rumored that some adults have been known to check themselves into the local loony-bin after having their noggin exposed to the song on extended bus rides with high-strung sugar laden kids who sing the song for hours on end. If that was me, I would just consider putting a bullet in my noggin -just sayin’.

Buses and motor homes used in the entertainment industry are a little different. That’s not how we roll. Prevost is the leader in building entertainer coaches (don’t call them buses.) With most Prevost coaches having a price tag way north of the $500,000 mark, it is understandable that some of these coaches have all of the luxuries of home. Lookie at this:

These coaches can be customized and configured to the whim of the entertainer.  Some will have a full-sized queen bed room and then up to 6 additional sleeping bunks, while others have been customized to sleep up to 12. Each “bunk” has its own private video screen and entertainment console for those long drives in between gigs. Most have full kitchens, full size washer and dryers, several bathrooms, some with full showers, multiple plasma flat screen TV’s, marble counter tops, etc. It’s amazing what you can customize into a 45′ rolling vehicle.

Recently, while filming a new “Men In Black lll” movie in New York actor Will Smith upset A SoHo neighborhood when his double-decker motor home (don’t call it a trailer) was parked on their trendy street. 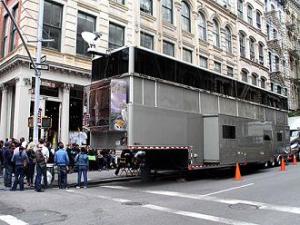 Will has even named the beast, “The Heat.”  Technically the 55-foot vehicle is a double-decker mobile mansion that offers more space than a two bedroom, two bathroom New York city apartment. It has no less than 22 wheels and a gross weight of 30 tons. Yes, it is bigger than Mr. Bricks, but not by much.

Will paid $1.8 million for the luxury motor home, and it was eventually moved to an empty lot after the complaints from the neighborhood. In addition to “The Heat”, Smith also brought a second 55-foot trailer, featuring his own full-sized gym. Both motor homes were made by Anderson Mobile Estates and Smith had it customized by creating makeup and wardrobe area, screening area, lounge and working area for his staff and writers.

So, I am sure many of you are wondering what type of luxurious entertainer’s coach has my manager Mr. Bricks provided this Greek girl for her tours.  Here you go. No autographs please.

What's that old saying? Don't judge a bus by its tires.

Something is messed up with Mr. Bricks’ coconut.

Hello! Thanks for stopping by. My name is Ava Aston and I am a recording artist and actress. I'm just an ordinary girl who acts, sings, writes songs and now writes this blog. I hope you enjoy my blogging enough to want to subscribe. Blessings, Ava If you want to learn even more about me, check out my website at www.avaaston.com
View all posts by Ava Aston's Muckery →
This entry was posted in "Gone", Actress, Ava Aston, Blog, Mr. Bricks, Music Industry, recording artist, Rocker chick and tagged ava aston, Celebrity motor homes, Entertainer's Coaches, Men in Black lll, Mr. Bricks, Provost, Taylor Swift Tour Bus, Tour Bus, Wheekls on the bus go round and round, Will Smith. Bookmark the permalink.