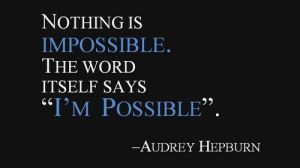 Warning: True story alert.  For people who have been reading my blog a while, you know how the Greek Girl rolls.  I call it like I see it and do not accept the “status quo”.  So for people who are perfectly happy to accept things as they are, well this blog might be a little uncomfortable for you.  Anyone else grab your favorite beverage and read on.

The past week had been well… let’s just say I’ve had better weeks.  I’m sure you can relate.    Everyone has at some point or another experienced times when the road to getting to where we want to go can be a bit difficult.  Normally when people tell me no, or that something can’t be done, I just stuff my ears full of cotton balls and go “la la la la la”…  Onward and upward.

However in this instance it just irked me.  I was considering new representation for my acting (and my music or so I thought).   Well… what else is Greek Girl going to do while Mr. Bricks is off doing his “Rat Pack of Hollywood” books?  Someone has to bang down the doors to get me my record deal dangit.  So anyway I was having a phone conversation with a manager I met through a friend.  Not an A list guy, but definitely a step in the right direction.  To make a long story short, the following is how the conversation went:

Manager: “So how old are you?”

Ava: “How old do you want me to be?… (laughing) well, how old do I look – you have seen me in person up close.  Do you want my real age or my actor age?” Then I tell him my real age.

Manager: “Oh, wow I wouldn’t have guessed that.”

Manager: “Well, I can’t do anything for you with music.  You are too old, the gate keepers do not allow new artists to be your age.”  “So I would rather focus on your acting, then after you get some notoriety, then maybe that can open up an opportunity.”

I’m sure you can imagine what my inside voice was saying.  Seriously… “Do Not Allow” Um when did people start “allowing” anyone to do anything anyhow?  Are we talking about pre school here where we have to ask permission?  Note to such “gatekeepers”.  People who buy music (you know the ones who are not buying the crap you keep putting out artist after artist) they do not give two flying flips how old the artist is who is singing the music.  If it makes them feel something, they like it, it’s that simple.

Why not look for music that makes you feel something first, then worry about how to market it.  Putting the package ahead of the talent is the downfall of the entire music industry.  Setting up this unspoken rule that no new female artists are allowed above the age of 28 is utter insanity.  I predict that if the music industry continues to churn out, use up and spit out the same thing year after year, it will not only continue to see losses, but it very well could be it’s undoing.  When “executives” who do not know their ___ from their elbow, are sitting there making decisions, meanwhile grammy wining producers are selling jingles to make a living because they can not even get a meeting at a record label these days…  that is a problem.

Needless to say I did not sign with the new manager.  My point in telling you all this is so you can have an idea of what was going on inside my noggin when I saw the video I’m about to tell you about.  So the following morning I’m scrolling through my facebook newsfeed when I see a video titled “Never Ever Give Up”.

By the end of the video I was in tears.  Not only because it light an even bigger fire in me to reach my own goals, but because it reminded me that nothing is impossible for anyone.  No matter what you desire (for me a record deal) but it could be a new job, a mate, fly a plane, be a ballerina, be president, run a marathon, get out of debt, be cured of cancer, whatever you can imagine… and yes even to lose over 140 lbs, if you have it deep down in your gut.  If you know like you know like you know you know, and you believe in yourself, it IS possible.

I’ve been at this a long time, and I am not about to let anyone tell me that it is not possible.  All of us can do whatever it is that we put our minds to.  It all comes down to your will.  How strong is it?  Do you hang in there when the going gets tough?  When everyone tells you that is can not happen, it’s been too long, you do not have the right contacts, the right background, the right this, the right that, blah blah blah…. I want you to do like I do.  Stuff you ears full of cotton balls and go  “la la la la la I can’t hear you”.

I wrote my newest song “I Don’t Even Care” because if this exact thing.  A few lines: “Don’t let them tell you what you’re gonna be or gonna do – don’t make a left don’t make a right just look in front of you”.  The message is simple: Don’t let other people tell you what you can or can not do and keep your eyes focused on the goal.  Just like the man named Arthur in this video, a Military Veteran.  He tapped into his will and was able to defy the odds and do what everyone told him was impossible.  Everyone had given up on him, and he had listened to them for so long, he had even given up on himself.

But because of one man, a professional wrestler and yoga teacher named Diamond Dallas who believed in him, Arthur started to believe in himself again.  He found his will and focused on his goal until he reached it.  I wish that more people would be like that yoga teacher.  To be the one person who believes in someone even when they don’t believe in themselves anymore.  Help someone to see that nothing, no matter how big is impossible.  Hope you have a beautiful day!