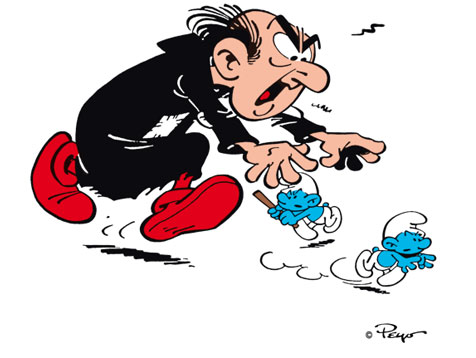 If you stop Gargamel just might get you, so you have to keep on going!

Did you ever have one of those days?…  Of course you have.  I mean that is unless you’re one of the Smurf’s living in a cartoon world where everything is drawn out for you.  I mean imagine if you were a Smurf, what’s the worst thing that could ever happen?  You get chased by Gargamel?

Seriously though… if you’re not a Smurf and you’re a real person living in the real world it is highly plausible that at one time or another you’ve had a bad day.  So what do you do when that happens to you?  Are you the kind of person who just buries their head under the covers to hide until it has passed?  Or do you dig your heels in and push back when the world pushes at you.

Because no matter who we are, where we live, or what we do or are trying to do, there always comes a point where we have to make a choice.  Chose to keep going or give up.  For me there is no other option, I keep going.  Maybe it’s that Greek “Stubborn” gene I was born with, you know the same Greek gene that invented the Windex, Acting, Politics, or any of the other cool stuff that came from the ancient Greeks.  Or maybe it’s because I have spent my entire life chasing the same goal, I don’t know.

For some people it’s not that easy.  Some people find out what they are made of early on in life, for others it comes later.  Some, however never discover how strong they really are.  That makes me sad.  Some people give up before they have ever really reached their true potential, and even worse some do the unthinkable, they kill themselves.

How is it that so many celebrities have committed suicide lately?  Some have flat out killed themselves.  Others did it slower with drugs and alcohol and overdosed.  My question is, how is it that so many people with seemingly so much to live for and to look forward to could give up so easily?  I think part of it, well maybe a big part of it is because as a society we are living in very negatively infused times.

The media is quick to prop up, chew up and spit out sensation or celebrity of the week.  While the powers that be are pushing the idea that hard work should not be rewarded and everything in life is fair.  But in reality – life is not fair at all.  The good guys don’t always win, and the bad guys don’t always lose.  So when life beats down on the people who do not have a strong sense of who they are and where they are going, what happens?  When God has been removed from everywhere he might be able to “offend” anyone, what do these people who do not know where to turn do?  Sadly we see the results all around us.

Many people are so much stronger than then give themselves credit for.  Quick to assume they can’t do something, when in reality they have no idea how strong they really are until they push themselves past where they thought they “couldn’t” go.  I just have one wish for everyone who is having a bad day… Don’t quit.  You might not “feel” like you can do it, you might not see how now.  But if you quit, you will never reach your goal.  If you keep going, there is always hope.

One of my favorite quotes from one of my fitness heros:

Hello! Thanks for stopping by. My name is Ava Aston and I am a recording artist and actress. I'm just an ordinary girl who acts, sings, writes songs and now writes this blog. I hope you enjoy my blogging enough to want to subscribe. Blessings, Ava If you want to learn even more about me, check out my website at www.avaaston.com
View all posts by Ava Aston's Muckery →
This entry was posted in Ava Aston, Blog, Entertainment Industry, Motivation, oppinion, philosophic, Uncategorized and tagged "Bad Day", ava aston, celebrities, don't quit, gargamel, Jillian Michaels, pop culture, smurfs, suicide. Bookmark the permalink.