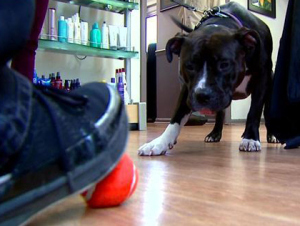 Anyone who knows me knows one thing, Greek Girl loves animals, dogs in particular.  What else could explain how I ended up having five of them?  So it’s not surprising to me when I see a story like the one I’m about to share with you.

Recently a Pitbull named “Creature” saved an elderly woman with Alzheimer’s Disease in New Jersey.  The woman had wandered off, her daughter and son in law called the authorities.  They came in droves, and even had helicopter’s aide in the search to find her.  They were having no luck at all.  Meanwhile an unsuspecting woman was walking her Pitbull “Creature” that evening.  Creature kept taking her back into the woods, she would try to leave and he would turn back leading her to the woods.  She came upon the elderly woman trying to get up, but every time she did the branches she was lying on would break and she would fall back down.

So heartwarming, and so special one might say.  Really it is not uncommon of a Pitbull at all.  Despite being the world’s most misunderstood breed of dog, they are also immensely intelligent.  How do I know all this stuff about Pitbulls you might be wondering?  “Pitbulls and Paroles” on Animal Planet of course! ;D  Seriously though… I have rescued many a dog in my day (Pitbulls included) and all dogs are good dogs.  There are not “Bad Dogs”, just bad people.

People who abuse, mistreat, neglect, do not spay/neuter, backyard breed, abandon, torture and do unthinkable things to animals.  I can not understand it, they are God’s creatures.  All dogs want is to love us and to make us happy.  A safe place to sleep (preferably in our beds) lol, food in their little bellies, and love.  It’s that simple.  Too many people view them as dispensable, and get rid of them if it becomes inconvenient.  Or they think maybe they can make a couple of bucks by breeding them.  Not realizing that those are not cupcakes.  Chances are not all the puppies in that litter will have a long happy life with the owner who bought it.  Many will end up in shelters, and that is why thousands upon thousands of dogs are euthanized every single day.

There are dogs living in the streets who have been discarded.  The cat situation is even worse.  The Ferrell cat problem is almost epidemic in some ares.  They are not vaccinated, not people friendly, and just breed out of control.  So many things like feline leukemia, feline aides, rabies, and a whole bunch of other things that are all preventable.

Not everyone has the patience to deal with a dog that has been abused.  Some you would never know they had been abused, they are so loving, like it never happened.  Yet others like my “Pepe” are so scarred, even after almost five months in a loving safe home he still does not fully trust and is afraid.  Our poor guy had his fang tooth knocked out, burns all over his back of his little body and weighed only 9 lbs when we took him in.  He’s now a plump 14.5 – little chow hound.

It’s not the dogs fault the people do bad things.  Just like it’s not the Pitbulls fault they are bred to feed the disgusting industry of dog fighting, and are treated like garbage.  They are not “Bad Dogs”.  Yes temperament and health issues can be passed along especially in backyard breeding.  But to label and entire breed of dogs “Bad” just because people have abused it for decades it not right at all.

Creature is a hero and just one example of the incredible Pit Bull.  Right now there are dogs in shelters across the country waiting to get a second chance.  Waiting for someone to love them.  My little “Pepe” is not a Pitbull, but I can tell you that when I see him sleeping on his side, doing his little exhale and in full relaxation.  My heart breaks a million times over for what he went through.  To see his little face light up when we go for a walk or in the car for bye bye, his life is changed forever.

Could you imagine someone abusing this little face?… Well they did. I’d like to meet them in a dark alley. Just sayin.

I’ve rescued and helped place all kinds of dogs including Pitbulls and they are so special.  If anyone is thinking about a companion… before you shop, please won’t you consider adoption?  There are rescue’s all over the country, and all kinds of breeds, including mutts.  Visit http://www.petfinder.com, type in your zip code, what kind of pet you are looking for, and you are on your way to saving someone’s life.