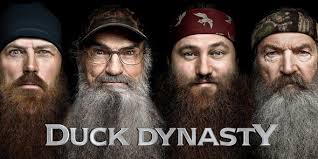 Dang it…  I woke up this morning to find out the breaking news that The Kathy Griffin Show was cancelled.  I can’t figure out why in the heck Bravo would decide to cancel such a great example of what’s not funny, vile, obnoxious, and just plain ugly behavior in a television show?

Seriously though in my humble Greek opinion this is a good thing.  Especially when Bravo has a whole lot of actual funny TV shows to compete with.  What do I consider good comedy on TV?  Hello AETV of course!

What can compete with Duck Dynasty and Storage Wars?  Now That is good TV, and not only is it funny, but it isn’t highlighting a mean nasty person making fun of people and cursing the entire show.  (Hmmm maybe just a thought for your next show idea Bravo)  Between those two shows it’s a wonder I can get anything done around my house.

What’s not to love about Duck Dynasty?  You have a show about a family that built a business into a Million Dollar empire, a good old fashioned success story.  Like every family it’s full of characters… mix in that they are a family of hillbilly characters trying to work together…. and you get a whole lotta funny.   Not only all of that but they embrace family values, and God.  Wow what a concept… anyone hear of that before.  I mean I know almost every other media outlet is busy banning the word to make sure we don’t offend anyone… but Duck Dynasty not only stands up on their values and convictions and makes us laugh while they do it, they end every episode gathered around a meal as a family in prayer with their heads bowed.  We have a word for this in Greek…. Kudos! ;D Reminds me a little bit of a show from days gone by “The Walton’s” if I’m not mistaken it was quite a successful show… just sayin.

Then there is my other guilty pleasure “Storage Wars”.  What’s so great about Storage Wars…. Well first off it doesn’t have Kathy Griffin on it.  No seriously it’s about getting a good deal on a storage locker that’s possibly filled with treasures the cast can sell and make a profit on.  HELLO this is a perfect combination!  Remember I’m Greek which is another word for “thrifty” ;D  The show is just plain addicting.  You just never know what they are going to find in the lockers, and the cast is always wrapped up in the middle of some drama between each other.  From Barry’s crazy getups and schemes and plots to distract the other buyers to Daryl’s Sheets’s constant “That’s a $20, $30, $40 dollar bill right there” every time he picks up some odd ball item he’s found in his locker.  I laugh so hard sometimes my stomach hurts.

So the moral of the story, what’s the magic formula for a hit TV show?  Don’t put Kathy Griffin or for the Love of God the Kardashian’s in it.  Have a smile & a beautiful day!