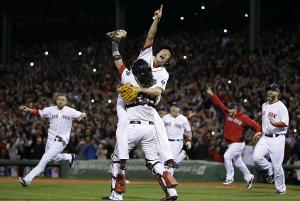 Woo-Hoo! The Red Sox are the best team in baseball and are going to prove it one more time by winning the World Series!

How do I spell amazing??  “R-E-D S-O-X” of course.  If you don’t know what I’m talking about then you have got to be literaly living under a rock.  So, since I am sure you DO know what I am talking about, I won’t bore you with the details other than the Red Sox not only have the best record in all of Major League Baseball, but have gone ahead and moved just one step closer to sealing the deal by winning the ALCS.  For those who don’t know what that is, you should just stop reading this blog right now! ;o)

What I think is so amazing about this years World Series besides the fact that my favorite baseball team is going to be playing (and winning it of course) but that it’s almost like a nice thumb in the eye to those who set out to attack our very way of life.  It’s not even been one year since The Boston Marathon was attacked and the entire world was glued to the TV as we watched the Boston bomber being hunted down in one of America’s oldest and most beloved cities.  The Red Sox showed just what kind of Stand Up organization they are the very next game by doing a beautiful and moving tribute.  How amazing it was that they used America’s Favorite Pastime, “BASEBALL” as a way to honor those whose lives that were lost in that tragic event, and chose to give back to the city loved by so many.  To continue that amazing heritage through hosting the World Series in one of the greatest ballparks in the world, Fenway is just going to be one more awesome thing to behold.  Oh man what I would give to be singing The National Anthem this year… (paging Mr. Bricks – eh hem can you hear me Mr. Bricks) 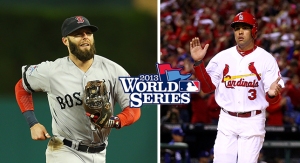 Now, in case you were wondering what I am going to be doing this week, you can go ahead and check that worry at the door because I will be parking my little Greek Butt on the couch with my sweetheart, our 4 doggies and some Dunkin’s to watch as The Boston Red Sox bring the Red Sox Nation to life as they romp over the St. Louis Cardinals.  So you can be sure I will be looking forward to David Ortiz, the Big Papi along with the exciting bats of Napoli and Pedroia and of course I will be hoping for more from Victoriano.  As those who were watching Saturday night know it was him that hit the Grand Slam homer to send the Sox to big show.  And who could forget about the amazing bullpen with the MVP Koji Uehara who is just insane on the mound?

So in case you want to do your homework and get your Honorary Red Sox Nation membership card go on over to http://www.RedSox.com and don’t forget to wear your beards and wear them proud!

Oh and before I forget, here is the schedule, which is the “Do not call or email Ava time”: 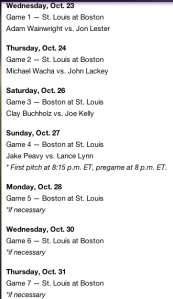 Hello! Thanks for stopping by. My name is Ava Aston and I am a recording artist and actress. I'm just an ordinary girl who acts, sings, writes songs and now writes this blog. I hope you enjoy my blogging enough to want to subscribe. Blessings, Ava If you want to learn even more about me, check out my website at www.avaaston.com
View all posts by Ava Aston's Muckery →
This entry was posted in dunkin donuts, oppinion, Random, sports, Uncategorized and tagged alcs, ava aston, boston, boston bomber, cardinals, Dunkin Donuts, fenway, koji, ortiz, rally beard, red sox, red sox nation, st louis, victoriano, world series. Bookmark the permalink.