So I’m minding my own business Saturday afternoon running around with my very favorite person in the whole wide world. We were hungry and decided to stop to grab a quick lunch somewhere that would be fast. Since we didn’t want “fast food” we decided to stop at a place that was a little off the beaten path, right next to a grocery store that has healthy made to order grub.

We walked up to the door when at the same time a man tied a little dog to a cigarette pole outside the entrance to the grocery store and the place where we were about to eat. It was less than 20 degrees outside, the dog was under ten pounds, not wearing a sweater or collar, and had a beat up old leash tied around it’s neck. It was shivering uncontrollably and looked like it was suffering. My husband looked at the dog, looked at me and I could literally see the words in a bubble over his head “oh no here we go again.” Being that this was not my first time to the rescue rodeo, of course I walked right up and started petting and talking to the little guy trying to see what was going on. My gut told me this was a very irresponsible dog owner, and that this dog was not safe with the man who had just tied him to the pole.

My husband sat down with the dog on the bench and the dog put his little paw on my husbands leg as if to say “please don’t leave, help me”. Then about 10 minutes later the guy comes strolling out with his $200 headphones on wearing Nike sneakers that cost upwards of $150. He proceeds to say “Oh you loving on him, you like him?… you want him? I gotta get rid of him – he cost me too much money. He broke a lava lamp and he’s too much work.” I tried and really wanted to have a rational conversation with the man but once he told me “cut his nuts off, no way I would never do that, take away his manhood – that is cruel” when I had asked him if the dog was neutered; meanwhile complaining the little dog was too “rambunctious” (which neutering would solve that issue he was complaining about calm him down – but that would be you know “cruel”) I knew there was no rational conversation to be had. Best thing to do in my noggin, get the dog away from him, and to safety. The man literally gave him to us right there just like that. So even though we were visiting my mom out of town, have four dogs of our own that were visiting with us, and my mom has two dogs, making for a grand total of six dogs staying in her house already…. I scooped him up into my arms and away we went with little  Mr. Scottish Terrier/Dachshund mix. 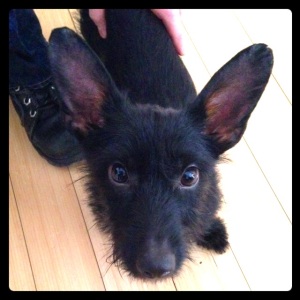 Next thing, to text my mom a picture to make sure we didn’t get lambasted when we walked in her house with a strange little doggie. The poor thing smelled like a giant cigarette, was dirty, starving, skinny as a rail and was so cold. I wrapped him in a blanket, then we got him a hamburger, a new red collar, matching step in harness and leash, some food and off to grandmothers house we went to give him a proper bath.

He met all the fur kids and well lets just say it was one great big fat muckery sandwich. None of our fur kids liked him. Probably the fact that he was not neutered and his constant humping might have had something to do with it. We were thinking to maybe keep him ourselves having lost a furbaby to congestive heart failure a few months back, but the fur kids not taking to him and in fact two of them trying to kill him made that an impossibility. We decided it would be best to re-home him to a safe loving forever home. So after a fun filled night of having him sleep in a crate, taking him out about a dozen times during the night to potty, several chaotic episodes including almost setting my moms power cord on fire when he dumped a can of soda onto it… a friend who runs a reputable rescue agreed to take little “Scotty” and make sure he gets a loving forever home, after he is fully vetted, gets all of his shots, and is neutered. They won’t just let anyone adopt, they take applications, screen potential adopters, as well as do vet and home checks to ensure the adopters are going to be forever homes where the pet will be safe. Check em’ out at HubbardsHounds.com

So after 24 hrs of muckery little “Scotty” is now safe and sound from a very unsafe situation. Who knows what kind of life that little guy might have had if we had not decided to go to lunch where we did that day. Turns out we never even ate there as we left as soon as the man said we could take him, and after all of that ended up eating “fast food” the very thing we were trying to avoid in the first place via Wendy’s, and little “Scotty” had some too. Just before he went onto have his bath and organic, human grade fur dog food at grandmothers house of course.

The moral of the story… so many people just walk on by when they see something that seems a little off. They think in their mind things like: I’m too busy, it’s not my problem, someone else will do something. You know what?… Sometimes that “someone else” is YOU. Don’t ignore your gut and that little voice telling you to do something. You might just be the answer to someones prayer. I know we did the right thing that day by helping that little doggie. Yes it was time out of our plans, yes we spent money to buy him things and donate to the rescue who would pay for his vetting, but it was well worth it to change that little dogs life around. Think you can’t afford to help like we did? Think again… even if he were taken directly to a local shelter (which would have been free), he would have still been a million times better off then with a man who would make an approximately six month old dog walk in freezing cold weather malnourished with no protection from the elements and then tie him unattended to a pole.

Yes we are dog savvy and knew things to look for and do before ever exposing him to our own pets for safety reasons, as well as de-worming him in case he had any worms, not allowing our dogs to be in contact with his poo, and all that stuff. At the very least even someone who isn’t “dog savvy” can help a pet in peril by simply reporting the abuse or abandonment to the proper authorities, or just take it and instead take the pet to a shelter or rescue.

So many people think of pets as dispensable, or even worse as a cash cow, pets are not for making money. They are God’s little creatures and we were given charge over them to care for them. Not to make a living from by backyard breeding the heck out of them. For the life of me I can’t understand why people do not spay/neuter. There is just no excuse, low cost options are available almost everywhere. Not giving shots and flea/tick prevention is inexcusable as well. Almost every chain pet store holds low cost shot clinics monthly all over the country. If you can’t afford to keep a pet up to date on shots and properly protected from fleas, ticks and heart worm, then you shouldn’t have a pet.

I’m not for “more regulations” but there is a very simple solution to the epidemic animal abuse and overpopulation. Stop selling dogs/cats in pet stores, period! Stop breeding for profit, pets are not money making machines. For anyone who wants to show dogs and breed for betterment of the breed, showing, etc. they can take a test like a Dr. and get a “license” and pay a high yearly fee. This will keep out the people who overbreed for money, puppy mills and the “backyard or kitchen breeders”.  Unless someone is dedicated to betterment of the breed and trying to get to the Westminster Dog show then they have no business breeding their dogs.

Animal shelters and rescues are beyond full. People do unthinkable things to animals daily, abuse, dumping senior pets at high kill shelters when they are done with them for a new puppy, dog fighting, leaving out in elements, etc. Every day thousands of pets are put to sleep in shelters all over the country simply because there are not enough people to adopt them all and too many ignorant people are still out there breeding making more. I’m beyond disgusted with how little regard people in our world give to Gods creatures.

BTW who gives a flying flip about what “breed” a dog is?… All dogs are beautiful! ~ Don’t shop Adopt! ~ It’s Super easy… just go to petfinder.com

OK stepping down off of my soapbox for now, I’m so happy that little “Scotty” has a new leash on life and it is my prayer that one day all animals will be safe, sound and loved.

Hello! Thanks for stopping by. My name is Ava Aston and I am a recording artist and actress. I'm just an ordinary girl who acts, sings, writes songs and now writes this blog. I hope you enjoy my blogging enough to want to subscribe. Blessings, Ava If you want to learn even more about me, check out my website at www.avaaston.com
View all posts by Ava Aston's Muckery →
This entry was posted in Uncategorized and tagged animal rescue, ASPCA, ava aston, cold weather, dogs, Hubbard's Hounds, neuter, petfinder.com, Spay, Westminster Dog Show. Bookmark the permalink.