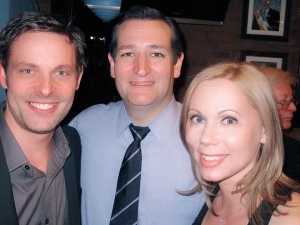 It’s no secret that Greek Girl rolls to the right. So I’m sure you can imagine when I learned I was invited to an event where Senator Ted Cruz would be speaking I was excited to say the least. In fact I was so excited I almost spilled my hot cup of Dunkin’s all over my lap as I was reading the email announcing the event. No it wasn’t a “thrill up my leg” but I’ll leave that to Chris Matthews for when he’s watching Obama.

Thanks to some good friends who arrived a smidge early we were able to get a table in the front and what an evening. First I have to say how down to earth he was. No entourage, no handlers, just him and a small staff. I’m not sure many people know this but he is actually very funny. Not only was he giving a rousing passionate talk about the madness that has taken over our great nation, but the entire time he was doing it with a smile and making everyone laugh. If ever there were a person who embodies the phrase “The Happy Warrior” it is Senator Ted Cruz.

Not only was he gracious enough to be there, and to stay for a log time, but he also took question after question after question. As I sat there listening I have to say something was happening. No it wasn’t a thrill up my leg, but I began to see something very special. I’m not sure if other people watching him on TV can see it. I’ve caught glimpses of it before watching on TV myself, but as I sat there it began to grow in my noggin from a whisper to a scream… this guy is so much like Reagan.

Right there in midst of all the chaos, confusion and madness that has taken over Washington there is someone there who is speaking the truth, understands and respects the constitution and founding documents, but also most importantly has the backbone to stand up for his convictions. As the world saw when he did the filibuster against Obamacare regardless if the left wing media demonized and labeled him a loon for doing so. Why?… because he gets it. He gets a fundamentally simple thing that almost all of Washington has either forgotten or has been ignoring for years. The United States is a Constitutional Republic, the Congress and Senate are elected officials who are elected to do what? To vote the “will of their constituents”. Too many elected officials get elected and then it’s almost as if they get sucked into some sort of vortex where they do not vote the will of the people who elected them, but rather vote down party lines or whomever is lining their pockets.

So as I sat there listening, I began to have hope again. There has been so much fighting and tearing down in politics for the last several years, I like many have wondered will America survive? In that event listening to him speak I saw hope that not all politicians are bad and not everyone is a slick talker just trying to win votes. There right in front of me was a man who spoke so honestly and passionately about common sense solutions and ideals. I began to see that there is really something very special about Ted Cruz, and if the people in this nation get a glimpse of what we all saw at that event last night, there may very well be another revolution coming. No it won’t be a Reagan Revolution like we had in the 1980’s, I think it will be bigger, much bigger.

Back then we didn’t have the internet, (Thank you Al Gore) bloggers, alternative news, and there were only three news channels. Now we have cable news and a plethra of technology to get information out in the blink of an eye. When the people in this country see what we all saw it may not be a revolution that is coming, it may look more like a Tidal Wave.

By the way my husband ran out to put his suit jacket in the car that was parked on the street out front later in the evening. The Senator had just left with his staff, and they were standing in front of the venue on the street just waiting. My husband said “hi” and asked them if they needed a ride jokingly. They said “no were all set.” Were they waiting for a town car, limo, a driver?… Nope they were waiting on a cab. Senator Ted Cruz with his staff of three hailed a cab and were all going together in a cab to their hotel. So when he talks about living within your means, and common sense principals know that he doesn’t just talk the talk, he has the courage to stand up and walk the walk.