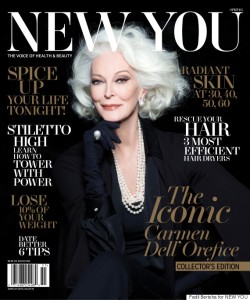 It’s never too late to do anything.

One of my very favorite quotes in the whole wide word (besides “The world runs on Dunkins”) is “Never, ever give up.” by one of history’s greatest heroes Sir Winston Churchill. Boy could we could sure use him in the times we’re living in today couldn’t we? But that’s a blog for another day.

What brings this quote to my mind? Recently, I read about an eighty three year old supermodel who just scored a Special Edition cover of New You Magazine. Gracing the cover of a magazine is nothing earth shattering for a supermodel to do. However because pop culture as a whole generally practices age bias on a regular basis and pushes the subliminal message that youth equals everything; to be eighty three and get the cover, that my friends in my humble Greek opinion is something to not only notice, but to stand up and cheer about.

Age bias is a subject not many people want to talk about, but it goes on every day in all walks of life. It’s prevalent in entertainment, pop culture, TV, film, music, news, and even in the job market. What it boils down to is there are people out there (the so called experts) who determine other peoples value by their age, when in fact it’s irrelevant. No one can avoid growing older, we’re all going to get to be a particular age at some point in our lives, yes even Justin Bieber. We have a choice, buy into the “youth is everything fairytale” or stand up for age like Carmen Dell’Orefice has done.

Don’t get me wrong, I’m not saying there is anything wrong with taking care of your health or striving to stay young at heart, body and mind. I believe your body is a miracle and you should definitely take care of it. What I am saying is that to allow someone to tell you that you’re either “too old or even too young” to do or achieve something is just ridiculous. If you’re still breathing you have every opportunity to achieve your dreams and goals.

There are people who have overcome insurmountable obstacles to go onto to achieve tremendous success in their fields. People who had they listened to the nay sayers, might never have. There are plenty, but I’ll just name a few.

When Susan Boyle was born she went without oxygen during the delivery. The Dr’s told her parents not to expect much from her. That she was born at a disadvantage and that she would never amount to much. She spent much of her life pursuing her dream and even when people discounted her, she didn’t let others determine her value. One day at the age of forty eight years old she got on a bus to audition for a singing competition in another city. She had never traveled that far alone, accidentally got on the wrong bus, and ended up taking six busses to get to the venue. She walked out onto the stage in stark contrast to most of the young hip contestants, stood firm in who she was, boldly told lead judge Simon Cowell her dream, and then showed the world her beautiful gift.

Dr. Ben Carson is another. Born and raised in Detroit, Michigan his parents divorced when he was eight. Raised in what many could call not the greatest of situations by a single mom. He went from a boy with a violent temper (in the ninth grade he nearly stabbed a friend in a fight over a radio station) to what some would call one of the world’s most intelligent people. How did he do this? At some point as a youth, he made a choice to not let his circumstances determine his value and where he would end up in life. He could have listened to the experts, not enough money to go to college, too hard, too this, too that. Instead he focused on what he had on the inside, his faith, worked hard and went onto to pioneer a brain surgery procedure and to be one of the most gifted neurosurgeons in the country if not the world.

The key is to know that your value does not come from superficial things like your looks or age. It’s refreshing to see things like music artist Annie Lenox still going strong. Her performance at the 2015 Grammy Awards brought down the house, and she showed beyond any shadow of a doubt that age just doesn’t matter. What matters is if you are good at what you do. So whatever you’re working towards, whether it’s to be a mom, a teacher, a Dr., a nurse, lawyer, mechanic, rocket scientist, or even a rocker… own it. Hone your skills and be the best one you can be. Don’t let anyone tell you you’re “too anything”.

Stand up and be you, because at the end of the day there will only ever be one you. In the words of one of my favorite acting teachers in NYC Eric Loeb: “Students want to know what casting directors want, and how to book a job. Stop acting, there is only one you. Being you is the only thing that makes you different from the fifty other people who read for the role before you walked in, so stop “acting” and just “be you.”

I would add be you wherever you are in your life right now. Then own it, like Fashion Icon Carmen Dell’Orefice does. Beauty is subjective, and real beauty comes from within.

I leave you with a song I wrote about this very thing called “I Don’t Even Care”. Written about stuffing your ears full of cotton balls when the Debbie Downers of the world try to rain on your parade.