Halloween (Howl-O-Ween for those of us who have pets) is right around the corner. I mean who can resist dressing up their furbabies in costumes anytime there is a holiday? Not this Greek Girl! Like everyone else life is busy and it can be hard to make time for just having fun. Even though I’m working on new music, making muckery and starting my own skincare line, it’s important for me to spend time with my furry-babies!

Recently I indulged in the yearly fall ritual of laughing my head off as I picked out the costumes for my furkids, so I thought it would be fun to post a virtual Halloween parade. So sit back relax and get ready… Time to bring on the cute!

2. Furkids 2011: Left to right: Itty Bitty (now at Rainbow Bridge) dressed as a punk rocker, Bobo top row dressed as a bumble bee, Pookie dressed as a bat, and Punkin again as a bug. (She was just too cute as it not to do it again). 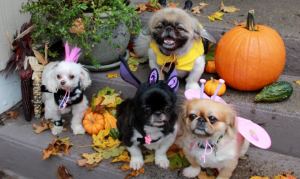 Just hurry up and take the pic so you can get these costumes off of us!

3.  Furkids 2012: A few days after Hurricane Sandy hit NY. We had no power, but in the midst of cleaning up we needed a good laugh, I mean there was so much sadness. We also had just taken in Pepe as a foster and wanted to get in into the swing of the costume routine. So… out with the phone. Top to bottom: Pepe dressed as a jailbird (fitting since we had just busted him out of doggie jail aka NYC ACC), Punkin dressed as a skunk, Bobo dressed as a shark, Itty bitty (now at rainbow bridge) dressed as a pumpkin, and Pookie dressed as an alligator.

Um, hello mom in case you didn’t realize a hurricane just happened here in NY we have no power… Why are you taking our pics in costumes?

4. Furkids 2013: Itty Bitty had just passed unexpectedly so we superimposed him into the pic. Left to right Itty Bitty, Bobo dressed as Elvis, Punkin as a Ladybug, Pepe as a dinosaur, and Pookie as a girl.

First Halloween without Itty Bitty he had just passed, so we super imposed him from last year.

5. Collage of some of my favorite costumes… Bobo as a bumble bee, Pepe as a lobster, Pepe as a jailbird, Bobo as a solider, and Punkin Pie as a witch. Which is what she says she feels like now that our latest addition Gracie has come into the house…

Collage of some of the furkids too cute!

6. Howl-O-Ween 2014: Their faces kill me in this one. First year with Gracie the King Charles we were fostering at the time and have since adopted. They are still not too keen on her, she’s younger than they are. Hopefully time will change that. Left to right Gracie dressed as a devil (Punkin picked that costume for her), Pookie as a princess, Bobo as a soldier, Pepe as a dragon, and Punkin as a witch. 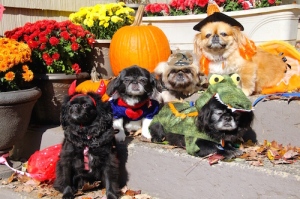 Bad enough we’re dressed in costumes… now we have a new dog in our pack… Ov vey!

So there you have it, the Halloween parade until this year 2015 photo is taken. We will soon be dressing them up again and I personally can’t wait to see my little monkeys dressed in costumes. Halloween isn’t really a holiday we celebrate except for dressing the dogs, but if you ask me this is the most fun! Be safe and happy howling.

Hello! Thanks for stopping by. My name is Ava Aston and I am a recording artist and actress. I'm just an ordinary girl who acts, sings, writes songs and now writes this blog. I hope you enjoy my blogging enough to want to subscribe. Blessings, Ava If you want to learn even more about me, check out my website at www.avaaston.com
View all posts by Ava Aston's Muckery →
This entry was posted in Uncategorized and tagged cat, costume, dog, fall, fun, furbabies, furkids, halloween, Holiday, Howl-O-Ween, love, october, parade, pet, pet costume, petco. Bookmark the permalink.